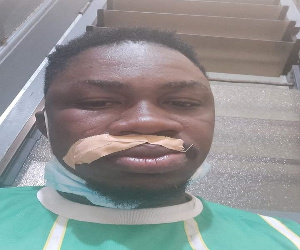 Police says it is a key partner of media

Investigations underway in case of assault on sports journalist

The Ghana Police Service have stated that it is investigating circumstances under which a Sekondi-based journalist with the Atinka Media Village was allegedly assaulted by a police officer.

Earlier, it was reported that a man suspected to be a police officer who is identified only as ‘Obuasi,’ assaulted the sports broadcaster, Solomon Amankwah, in Sekondi after an altercation ensued between the two.

Commenting on the incident through his Facebook page, the journalist narrated how after parking his car at the Sekondi Police Barracks on his way to visit his dad, mistakenly locked his car key in the car.

In a bid to manoeuvre to open his car to retrieve his key, the suspected police officer, engaged in an exchange of words with him and without provocation physically assaulted the journalist leaving him with a swollen face.

A statement from the police has however given further details of all that happened, as they know it.

Below are the details:

1. The person assaulted is a sports journalist working with the Atinka Media Village Western Region

2. The officer who allegedly assaulted him is General Lance Corporal Prince Mensah of the Regional CID Operations and Intelligence Unit

3. Preliminary investigations established that in the early hours of Monday, January 3, 2022, the journalist parked his vehicle, a Nissan Sentra with registration number GE 1042-12 at the Sekondi Police Barracks without notice to any police officer at the station and forgot his ignition key inside his vehicle

4. He was later spotted searching for a piece of metal in an accident car parked at the Police Station, apparently to use it to open his car door. The Police officer arrived at the scene at this stage and upon suspicion, questioned him about his activities and warned him to leave the barracks. Solomon Amankwah refused to Leave and this compelled the police to decide to arrest him for further interrogations

6. On the same day at about 2:45 pen, the Sekondi Divisional Command held a meeting with the management of Atinka Media Village Western Region and assured them of a thorough investigation into the incident

The police statement has also stated how the police have begun investigations into the incident, with assurances that it remains a key partner of the media in the promotion of peace, law and order.

“The Command wishes to assure the media and general public that the Police and the Media are key partners in the promotion of peace and security, law and order, and therefore the Police will always strive to maintain that cordial relationship,” the statement Deputy Superintendent of Police Olivia ET Adiku, who is the Head of the Police Public Affairs Unit of the Western region, said.

Source: www.ghanaweb.com
Related Topics:JOURNALISTSEKONDI
Up Next

Three grabbed for unlawful possession of firearm, other implements