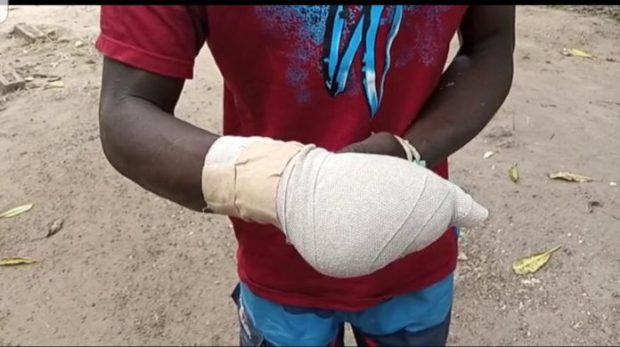 A man has lost both his phone and his four fingers to a suspected thief in the Berekum West District of the Bono Region.

The victim, identified as Iddrisu Razak’s fingers were chopped off allegedly by a friend he had a confrontation with over phone theft.

The man, explaining the situation to Adom News, said the suspect, Lopez, is his friend who he had pleaded with to charge his phone for while he left for work.

But, Lopez came with the news that his phone had been stolen and he knew the perpetrator but refused to send Mr Razak to the said suspect.

The situation, the man said, made him suspect his friend and after a confrontation, a fight broke out. Calm was, however, restored shortly after.

Three days after the said fight, Mr Razak, who was riding a motorbike, felt a sharp pain on his hand, only for him to realise he had been ambushed and allegedly slashed by Lopez.

Four of his fingers, excluding his thumb, fell off, and all efforts to reattach have proved futile over delay in getting to a hospital.

The suspect has been declared wanted by the police. He is currently at large.