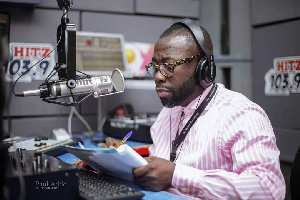 Speaking in an interview with his colleague KMJ on Joy Entertainment’s Daybreak Hitz, Andy Dosty disclosed that he had been tasked to represent Ghana at Creative Africa Nexus at the Intra-African Trade Fair 2021.

However, when he was performing the duties for which he was asked to attend the fair and represent Ghana, some security guard asked that he stops playing KiDi’s ‘Touch It’ even though it got dozens of ladies dancing at the fair.

He revealed that when the song was playing, a security officer walked to him and asked him to “turn the music off” and command he was very reluctant to obey but before he could compose himself and continue his duties, a reinforcement of armed security guards came to him and enforced that he stops playing the song.

Andy Dosty added that he felt very embarrassed but later took it in good faith after it was explained to him that it is likely because he asked the ladies to actually touch their breasts and other parts of the body when dancing to the song.

Anas wins ‘Foreign Journalist of The Year award’ in US

VIDEO: I need to clean my private parts well so you can sniff it – Stephanie Benson to husband