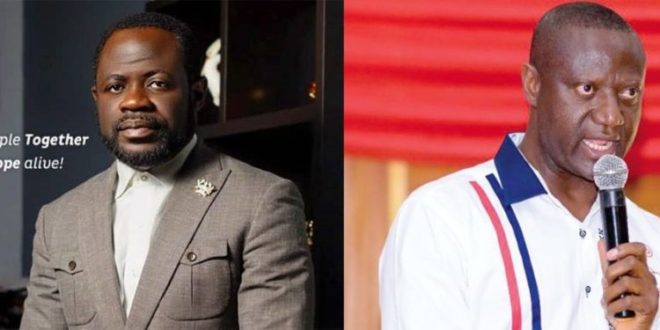 There was confusion on the campus of the University College of Agriculture and Environmental studies (UCAES) in Bunso in the Eastern Region Wednesday evening following the intrusion of the campaign team of Kwadwo Boateng Agyemang, who is aspiring for the Eastern Regional chairman position of the ruling New Patriotic Party( NPP).

Mr. Boateng Agyemang and his campaign team accompanied by armed security operatives reportedly invaded the campus at about 6:00pm to meet delegates from about four constituencies – Abuakwa North, Abuakwa South, Fanteakwa North and South without notifying management of the University college.

According to some students who spoke to Starr News, the campaign team drove away students who were occupying the conference room learning in preparation for end of semester examination.

This compelled some lecturers and administrative staff of the University college to intervene to question the campaign team over why they invaded the campus to hold a political program without permission from management.

This resulted in an altercation between the security operatives following the candidate and staff and students of the University.

Nonetheless, the campaign meeting proceeded without mutual agreement with management.

The Dean of Students at UCAES Dr. Oppong-Kusi told Starr News “We were here this evening and then we saw many cars, I mean political cars entering the campus. The Eastern regional chairman aspirant bringing delegates to the campus to talk to them. Nobody sought permission from anybody. We are in examination week and the place is supposed to be opened for students to study. They drove all the students away. The whole thing is that the people were so rude to us that who do you think I am, what is your qualification and all those things happening here so I was so annoyed ,I was crazy. So when they finished I stood in front of one of their vehicles that I will not allow them to leave without paying for the venue”.

However, Maxwell Nyamesah who is part of the campaign team of Mr. Boateng Agyemang said they initially booked the conference room of the Bunso cocoa college however the venue was too small to accommodate the huge numbers so they went to UCAES campus without prior permission but reached financial agreement with management.

“We did not invade the place, they charged us and we agreed after we explained the situation to them. So I don’t know where all these is coming from”.

The contest has sharply divided the party in the region. Reports say the Presidency is in support of Mr. Boateng, however, the campaign of Mr. Konadu is receiving endorsements from members of Parliament and many delegates.