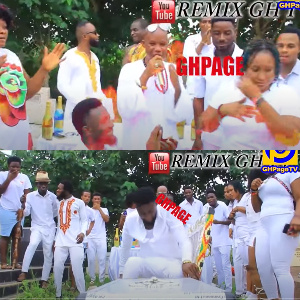 Kumawood actor, Samuel Nkrumah, popularly called Remes Kay, has narrated some bizarre circumstances that transpired during the time he was celebrating his birthday in the cemetery as reported by GhanaWeb on May 23, 2022.

According to the actor in an interview with GHPage, his girlfriend of many years has been hospitalised after he came out of a coffin and proposed to her.

“I didn’t want to talk about this incident but then I want people out there to pray for me and support me.

“When the birthday was ongoing, I removed a ring to propose to my girlfriend but when I knelt and asked her to be my wife, at once she closed her eyes and put her hand on her heart. I was waiting for her to say ‘yes or no’ but when she placed her hand on her chest, the next I saw was that she had collapsed,” he said.

To revive her, the actor added that people present at his birthday celebration helped his girlfriend into an ambulance that brought him in a coffin after she collapsed.

“When that happened, everything got messy and with the help of some of the guys present, they carried her away into the ambulance that brought me in a coffin and then they rushed her to the hospital.

“Till now, my girlfriend is still in the hospital and we are looking forward to seeing things go on smoothly,” he added.

In an earlier video that was making rounds on the internet, the birthday celebrant and his director were adorned in kente while patrons graced his birthday and were captured in all-white attires laughing and dancing in a cemetery.

A high table decorated with champagne, drinks, and a cake was placed between the tombs and the celebrant was seen with a knife, ready to cut his cake.

Interestingly, there were no seats and so some individuals had to resort to relaxing in the tombs as the proceedings went on.

Source: www.ghanaweb.com
ACTOR after at cemetery COLLAPSES GIRLFRIEND HE HER kumawood OF proposed to 2022-05-26
Elvis Anokye
Share