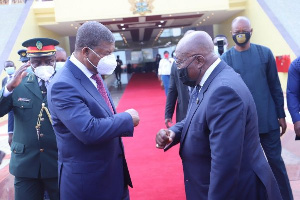 Lourenco, who was in the country on the invitation of President Nana Addo Dankwa Akufo-Addo, said this when he called at the Jubilee House, Accra to bid farewell to the President after his visit.

The Angolan President said he was leaving Ghana happy because the two countries had now established the requirements to strengthen and deepen ties.

He commended the Government and people of Ghana for the warm reception and excellent hospitality accorded him and his entourage, and said he would hold fond memories of the visit.

During his three-day visit, the two leaders initiated an agreement to hold consultations to boost political and economic ties.

The agreement allows for a consultative mechanism for Ghana and Angola to interact regularly on areas of mutual interest, particularly in mining and hydrocarbon development, agriculture, education, tourism, transportation, and maritime security.

Angola looks to explore Ghana’s vast experience in the mining and cocoa sectors, whilst Ghana seeks to benefit from Angola’s rich knowledge in oil and gas.

The leaders of the two nations, during bilateral talks, vowed to jointly fight threats to maritime security in the Gulf of Guinea.

President Akufo-Addo said Mr Lourenco’s visit had given new impetus to the ties between Ghana and Angola.

He made a personal commitment to ensuring that the two countries scaled up economic and political relations for their mutual benefit.

President Lourenco, in August 2019, invited President Akufo-Addo for a state visit to his country and so his visit to Ghana is a reciprocity.

As part of his visit, Mr Lourenco toured, laid a wreath and planted a tree at the Kwame Nkrumah Mausoleum in Accra.