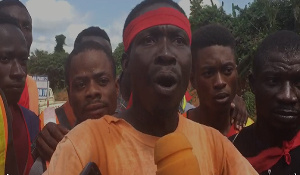 They were protesting Wednesday for better working conditions and remuneration.

In an attempt by the police to remove the roadblocks, the angry protesters began pelting the police officers with stones and other objects.

The police commander according to reports was caught up in the attack and in the process was also hit with stones.

Meanwhile, the angry road workers recounted they were met with brute force by the police as they suddenly trooped in and began firing gunshots and pepper spray indiscriminately resulting in retaliation.

WATCH| Another trotro driver captured on video urinating in traffic