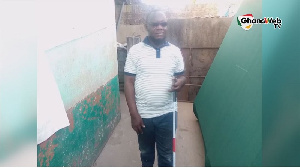 3Abdul Fatawu Iddrisu Kpadau, a visually impaired trained teacher, from the Wa Municipality of the Upper West Region has narrated how a corporal punishment by a teacher that nearly truncated his education rather inspired him to succeed through education.

Mr. Abdul-Fatawu who is married with two kids recounting his childhood days with GhanaWebsaid growing up as a child, he never regarded education as an avenue that could help him make it in life.

But he only viewed the school environment as a mere play or recreational ground.

According to him, this notion later changed after something dramatic happened which marked a turning point in his life during his final year at the Junior High School level.

He recounted how he was wrongly accused of insulting a Senior House Master of the Wa Methodist School for the Blind where he attended his basic education.

He said, as a result, he was subjected to a severe caning of 32 lashes by one Mr. Kwame K. Appiah, a science teacher of the school at the time.

He narrated that the science teacher refused to tell him his crime before administering the punishment when he sort to know the crime he had committed that warranted the caning.

Abdul-Fatawu Kpadau alias The Proud Blind man, as he prefers to be called, told GhanaWeb, teacher Kwame K. Appiah eventually gave him 32 strokes of the cane instead of the initial 64 strokes.

“So he gave me 32 canes (strokes of lashing) and I was holding a pillar while he was lashing me. So when he got to the 32 sort of caning (32 mark), he said it was okay and I said no, he told me he was going to lash me 64 (strokes) and I was ready to receive the 64 so he should continue with the 32 to make it 64. Or else, God wouldn’t forgive him.

“So he got furious and said that I insulted him. I said no I’m not insulting you because the crime that you said I committed, I didn’t commit it.

“…So he said it’s (the caning) okay, but I said if he didn’t continue it God won’t forgive him. So he said if that’s what I have said, then, I should never attend his class again,” he narrated.

He noted that this singular act by Mr. Kwame which perhaps was meant to break him down rather pushed him to become who he is today.

He challenged himself to rise through education so that he could sue the teacher one day when was in the position to do so.

“So it frustrated me to the extent that I failed. I failed totally not only in his paper (subject) because I was demoralized. So after that, I said no, I have to do something. And what I planned on doing is that I said, I would go back to school, find a job (after completing school) and sue K. K. Appiah at the court for having abused my rights because I realized he had really abused my rights,” he recounted.

Peace Man, as he is also known, noted that when he was at the university, he initiated steps to fulfil his dream of suing the teacher having consulted a lawyer.

However, he said upon sober reflection he decided to abandon the idea having realized that perhaps, but for the punishment he suffered at the hands of teacher Kwame K Appiah, he might not have been inspired enough to take education seriously.

He said as a little boy who lost his sight when he was about 3 years old, his parents ensured they enrolled him in school to give him a better independent future.

He continued his education at the Wa Senior High School, then to the Wa Nusrat Jahan Training College for a Diploma in Education.

He later went on to obtain a Bachelors of Social Studies at the University Education of Winneba and is currently stationed at the Fallahia Islamic Junior High School at Mamponteng in the Ashanti Region.

The 38-year-old who is widely known as an intelligent physically handicapped person by locals is also regarded as a true representation of the adage that says that “disability does not mean inability.”

Previous 15 in critical condition in multiple-vehicle crash at Mankessim
Next Angry road workers clash with police, Commander pelted with stones in the Central Region