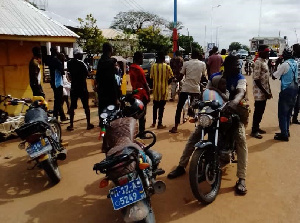 Some angry youth in the Atebubu-Amantin Municipality of the Bono East Region on Wednesday, July 13, 2022, besieged the Atebubu Municipal Police Station following the arrest of an Assembly Member.

The youth numbering over 200 from farming communities such as Jato Zongo, Sampa and Asanteboa converged in front of the police station around 7:00 am to demand the immediate release of Issaku Asomah, an Assembly Member who had been placed behind bars.

Not even a warning shot by the police could disperse the angry crowd who stood on their grounds and demanded the release of the Assembly Member.

The visibly charged crowd was unhappy with the arrest of the Assembly Member who they disclosed had not committed any crime but the timely intervention of the Divisional Police Commander, ACP Samuel Alordey, prevented the situation from escalating.

Narrating the incident, Issahaku Mohammed disclosed that there was a confrontation between some farmers and a company over farmlands at Abour Tiatia.

He added that the company subsequently reported the case to the police accusing the farmers of attacking and destroying a tractor belonging to the company leading to the arrest.

“There was a confrontation between some farmers and a cassava company over our farmlands which we have been working on for years. The company made a report that they were attacked so the Assembly Member was picked up by the police at dawn compelling the youth to storm the police station demanding his release”.

Another youth, Amadu Yakubu warned that the arrest of the Assembly Member will not cow them to yield and the youth are prepared to prevent the company from taking over their farmlands no matter the consequences.

Although the police have refused to officially comment on the matter, GhanaWeb is reliably informed that Issaku Asomah was later released after a series of engagements.

Issaku Asomah in a phone interview told this reporter that he was picked up by five police officers around 4:30 am for allegedly inciting the farmers to destroy the tractor, an allegation he flatly denies.

“Five police officers came and picked me up whilst I was asleep and brought me to the police station but I was later released and I am home now. I am innocent of the allegation they are accusing me of”.

He has appealed to the traditional authorities and other stakeholders to immediately step in and prevent the company from taking over the over 1000 hectares since the people are predominantly farmers and the move will deprive them of their livelihood.