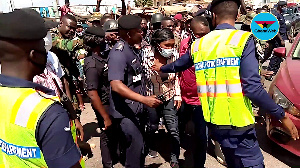 Member of Parliament for Ablekuma North, Nana Akua Owusu Afriyie had to be escorted by security personnel at the Awoshie-Mangoase area into her car Tuesday morning after irate youth hooted at her and chased her away.

The lawmaker had visited the area after her attention was drawn to an ongoing protest by residents, to help monitor the situation and calm nerves.

Residents who would have none of that from her, met her with complaints, amidst chants of “shame” and “you’ve failed us”.

The MP who obviously was unenthused and taken aback walked back into her car; escorted by police personnel and some of her men, and drove away.

Angry residents who were protesting the demise of some of their colleagues as a result of faulty traffic lights in the area, had massed up at the Mangoase traffic light, blocking the road and expressing their concerns.

The demonstrators, wielding placards were angry at authorities whom they claim have turned deaf ears and blind eyes to their calls for traffic lights in the area to be fixed.

Per their accounts, the absence of operational traffic lights in the area has accounted for accidents and subsequently, the death of two of their colleagues, within the past four days, with the latest being Monday evening.