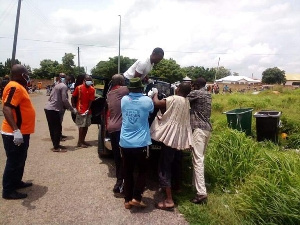 Another person found dead in Wa with stomach cut open

The Wa Municipality of the Upper West Region is gradually becoming an unsafe place to live in particularly at night due to the recent killings being recorded in the hitherto peaceful town.

Even before the Wa Police Command could unravel the mystery behind some two murders recorded in this year alone, another person was found dead and buried near his workplace on Sunday, July 31, 2022.

Mumuni Jaatuwa alias Kekala who is a night security man from Kpaguri, a suburb in the Wa Municipality was said to have left for work on Friday, July 29, after evening prayers but did not return home the following day.

As a result, a search party was activated and combed around the municipality on Saturday without success.

However, according to Buurinaa, a relative of the deceased, on Sunday after a failed search the previous day, the relatives decided to go back to the deceased’s working place for further search.

He said upon checking one of the uncompleted rooms at the premises, they noticed a portion of the room that appeared weeded with weeds spread over it. This raised their suspicion to call on the Police to the scene. The police dug to reveal the body of the deceased with his stomach cut open, revealing his intestines.

“On Friday, we performed the evening prayer together with him before he left for work. The following day, from morning to evening he didn’t return. Due to that we informed one another and began a search for him. We first went to his farm but we didn’t see him. Secondly, we went to his workplace but there was no trace of him either. We also went to check the Police station thinking that maybe he might have fallen foul of the law but he was not there. Also, we thought that maybe an accident can let him end at the hospital so we went and checked all the wards at the hospital to no avail. We left there around midnight on Saturday.

“So we decided that we’d continue our search for him on Sunday. The following day, we decided to go to his workplace again to check the uncompleted rooms on the premises. So upon entering one of the rooms, we saw that a part of the room appeared to have been dug and refilled, with the weeds on top of it. That heightened our suspicion and made us go back to inform the Police.

“The Police dug the place only to reveal his body with his stomach cut open and his intestines out. But as to what has been removed from the stomach, we can’t tell. So they (the hospital authorities and Police) promised to do what is expected of them and will release the body to us tomorrow Monday for burial,” the relative recounted.

Another relative, Simon Abu also stated that: “He is the youngest brother of my grandfather and I know he’s a night watchman (security) and I know where he works. I was at my farm when the incident happened. I went to see the Police Commander and he pledged to release the body to us tomorrow for burial. The deceased was a good man who rarely had issues with anyone and loved joking with everyone. God will take care of his killers. We leave everything in the hands of God.”

C/Inspector Gideon Ohene Boateng, Head of the Public Affairs unit of the Police Command confirmed the incident in an interview on Monday, August 1, and indicated the Police were doing everything possible to bring the perpetrators to book.

Asked why it was taking the Police too long to solve the recent murders, the Chief Inspector said:

“It’s very much pathetic as I early on said. It’s alarming, yes. But when the Police are investigating a case, in some incidences, a case may be finished with its investigations within two or three days. Others take about a year or two and others even ten years. It depends on the intelligence that we gather and to get the actual perpetrator in order not to lose the case in court. That’s why most, if Police hastily sends a case to court without gathering vital information that’ll let us win a case, at times you see that Police go court to flop.”

He appealed to the general public to be forthcoming with vital information to enable the Police to fight crime effectively.