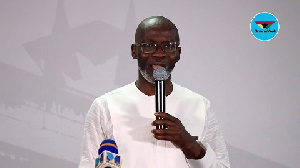 Gabby Otchere-Darko is opposed to to the anti-LGBTQ+ bill

He wants Parliament to pass a law that criminalizes adultery

Gabby Asare Otchere-Darko, a leading member of the governing New Patriotic Party has hinted that he will petition Parliament for the criminalization of adultery in the country.

The cousin of President Nana Addo Dankwa Akufo-Addo has not his hidden his opposition for the new bill which seeks to criminalize LGBTQ+ and its related matters in the country.

He has in several posts condemned the bill which he claims could get Ghana blacklisted by international agencies.

In his latest post on the issue, the private legal practitioner said that he is going to petition parliament for the criminalization of adultery since it is an affront to the dictates of the Christian faith which most Ghanaians subscribe to.

“Majority of Ghanaians are Christians. They believe in upholding Christian values. Adultery is a serious sin punishable by death (Lev. 20:10). I am therefore proposing a petition to Parliament for a Private Member’s Bill for a law against adultery, imposing stiff penalties,” his post read.

Meanwhile the Executive Secretary of the National Coalition for Proper Human Sexual Rights and Family Values, Moses Foh-Amoaning has hit back at Gabby over a previous comments.

Foh-Amoaning in a Joy FM interview said that Gabby Otchere Darko is speaking from a point of ignorance on the issue.

He explained that the bill, contrary to Gabby’s assertions does not promote hate for gays and lesbians but rather prescribes a process of redemption for them.

“I’ve heard Gabby say that those of us who are promoting the Bill are exposing Ghana to be blacklisted for hate but if you read the law, you’ll notice that this is no way about hate.

“The facts and the statistics show that, we need to galvanise, structure the law and ensure that the right things are done. This is not something that we have to leave, if we leave, we will be blown over,” he said.

“We are protecting everyone’s rights, including the rights of those LGBTQI activists. It is a bill that promotes proper human sexual rights and Ghanaian values. Those who accept that it is a medical condition, will not be sent to jail. Those that we are after are those who say it’s a lifestyle.

“We don’t hate. He should be very careful over the language that he uses. We can’t allow a degenerate moral behavior, packaged and superimposed on us, as a way of behaviour. That can’t be right. For my good friend Gabby, I’m sorry he should not make himself an object of colonialism,” he added.