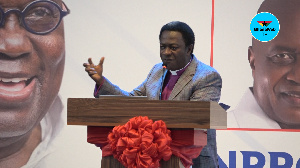 The man of God in his sermon was blunt and bold while emphasizing the need for unity amongst NPP members.

He indicated that a selfish attitude will ruin the party as the party claimed to ‘have the men’.

“They will sit down and watch; they want someone to fall for them to take the baton but you that one too, let me tell you if the group fails if the nation fails, you have failed. Maybe you called the wrong person to speak today,” the man of God said.

But what more is there to know about Apostle Emmanuel Osei Kwabena Donkor?

A July 2019 edition of Lead Ghana magazine sighted by GhanaWeb details that he is a God-fearing man who handles his official duties with the highest sense of responsibility and ensures good and clear communication and interpersonal skills.

His core values are people, honesty, innovation, tolerance, dedication, teamwork, and consistency. He is also a fellow of the Chartered Institute of Leadership and Governance.

On the educational front, the magazine to whom Apostle Donkor granted an interview stated that the man of God holds a PhD in Philosophy in Integrated Mission Theology and Church Administration from the Oracle university College, an affiliate of the North Western Christian University, Florida, USA.

According to his Facebook page as well, he is a product of the Kwame Nkrumah University of Science and Technology (KNUST) as well as Columbia University.

Apostle Emmanuel Osei Kwabena Donkor, in 2019 was reported by the magazine to be married to Mrs. Margaret Donkor with whom he has four children.

Asked by the magazine about a person who has had a tremendous impact on him as a leader, the man of God responded: