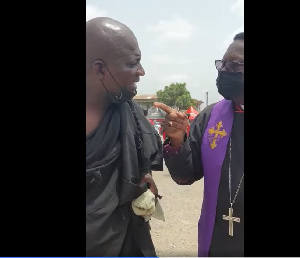 The Methodist Church of Ghana is calling on Ghanaians and members of the church to disregard a viral video by a popular NDC activist, Frank Kwaku Appiah a.k.a. Appiah Stadium, which seeks to discredit the reputation of Most Rev. Prof. Emmanuel Asante, a former Presiding Bishop of the Church.

Appiah Stadium in the viral video, confronted the immediate past Chairperson of the National Peace Council at a funeral of the late chief of Ofinso in the Ashanti Region.

He questioned Prof Asante on why he seems to have lost his voice under the current leadership of President Nana Addo Dankwa Akufo-Addo despite being an ardent critic of the erstwhile John Dramani Mahama.

But, the church in a statement sighted by GhanaWeb said, the viral video was recorded without Most Rev. Prof. Asante’s knowledge and consent.

It added, the video seeks to also create disaffection for the Bishop and other members of the clergy.

”We wish to state that the video was recorded without the knowledge and consent of the Most Rev. Prof Emmanuel Asante and this seeks to discredit the hard-won reputation of the eminent Cleric and to create disaffection for him and members of the Clergy. We wish to encourage all and sundry to disregard the said video and its content,” the statement from the Methodist Church of Ghana read in part.

“The Church stays unaligned to any political party and will comment on national issues as a Stakeholder in the development of our nation Ghana. God bless us all,” the statement signed by the Public Affairs Directorate concluded.

Meanwhile, Appiah Stadium justified his action in a radio interview and alleged that, the Reverend Minister got aggressive in his response and ended up threatening his life in the process.

The NDC serial caller told Neat FM’s Kwasi Abooagye that, “the last word he [Most Rev. Prof. Asante] told me was that, he will cut off my head. You can look at his gesture in the video; he threatened to cut off my head.”