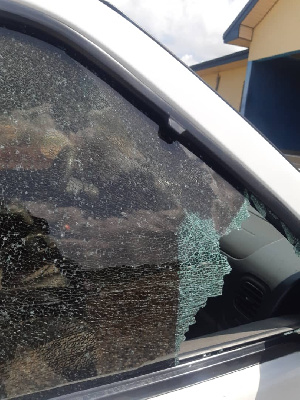 •Armed robbers have attacked another bullion van on Accra-Winneba road

The police in the Central region saved the day as armed robbers attacked a bullion van with registration number GN 6956-17 on Accra-Winneba road on Thursday, June 17, 2021.

The van which was attacked at Okyereko on the Winneba-Accra road was targeted by some armed men whose identities are unknown.

The robbers fired shots at the front passenger seat where the police escort sat. These shots ended up shattering the window area.

According to reports, the police escort ordered the driver to speed off upon observing the unusual movement of the robbers, while he called for reinforcement.

The Winneba Patrol team dispatched to Mpata Junction, rushed to the scene and started a gun battle with the robbers, overpowering them in the process.

All passengers in the bullion van escaped unharmed and no property was stolen.

The van has been sent to Winneber Police Custody for investigation.

This development comes after armed robbers shot to death, a police officer and an eyewitness, during a robbery incident involving a bullion van at Adedenkpo, a suburb of James Town in Accra, Monday, June 14.

Below are some tweets on the attack;

Previous WATCH: Maame Serwaa puts her Huge B00bs on Display In a new Video
Next One shot as sand winners clash with Okyeman taskforce at Adeiso