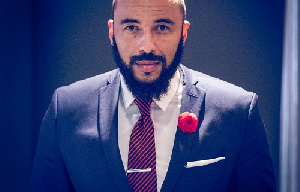 He sustained bruises from pistol beating

Ghana’s Tourism Ambassador, Matthew Mensah, has alleged he was attacked by some armed men in South Africa.

According to him, he was also almost kidnapped by the robbers.

The Ghana Tourism Ambassador shared his traumatizing experience on his Instagram page on December 11, 2021.

“To all those who have been trying to get hold of me; it was finally my time to get attacked by armed robbers in Johannesburg,” he told his followers.

Mensah added that he was, however, subjected to severe beatings by his attackers and has sustained some injuries as a result.

“I luckily escaped being hijacked but didn’t escape being robbed or some good old fashioned Pistol whipping,” he reiterated.

He also mentioned losing some personal belongings during the attack.

“But thank God for life & only a few bruises & loss of materialistic thing,” he shared.

Matthew Mensah further added that he was almost tossed into the booth of the armed men but his good running legs saved him.