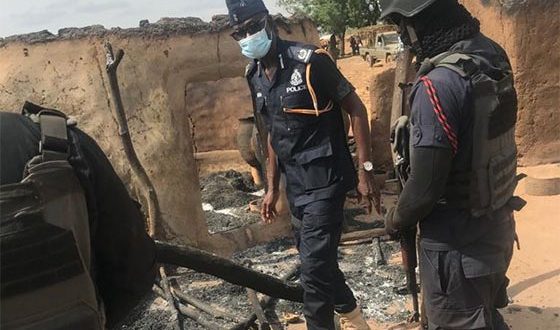 The Police are on a manhunt for two suspected armed robbers, who engaged the police in a shootout at Kwashieman, Accra, on Sunday.

The suspects, who suffered gunshot wounds during the shootout reportedly snatched a Toyota Yaris taxi cab with registration number GW8215-20 from its owner, at Lapaz, in Accra.

The Accra Regional Police Command, Public Relations Officer (PRO), Deputy Superintendent of Police (DSP) Effia Tenge, who disclosed these to the Ghanaian Times, in Accra, yesterday, stated that the police were investigating the case.

She said last Sunday at about 1:30 am, the police patrol team had information that a taxi cab had been snatched from its owner by armed robbers at Lapaz.

DSP Tenge said when members of the team spotted the taxi cab at Kwashieman, they chased it, and occupants of the taxi fired gun shots at the police, and the police returned fire.

“However, one occupant jumped off the vehicle to escape police arrest and the driver also managed to flee,” she added.

DSP Tenge stated that the patrol team later found the taxi cab parked at Busia Junction, a suburb of Odorkor, Accra, and a search conducted revealed that the driver’s seat was ‘heavily’ soaked in blood.

She said the vehicle had been towed to the Odorkor Police Station, while the investigation continued.

DSP Tenge appealed to staff of health facilities and herbal clinics to report to the police, anybody who would visit there with gunshot wounds.

“It is highly suspected that, the driver was hit by police bullet so the police is appealing to health facilities to report suspicious persons with gunshot wounds to the police for prompt action,” She added.

DSP Tenge said in another development, the police has commenced investigations into impersonation and fraud case, involving a self-styled military man, Richard Walker.

She said the suspect, has been released on police enquiry bail with one surety.

DSP Tenge stated that an immigration officer reported to police that, in October 2020, a supposed military officer, Walker, collected GH¢8,000.00 from him under the guise of recruiting his friend into the Ghana Armed Forces.

DSP Tenge said the suspect after collecting the money from the immigration officer, failed to fufil his promise, and rather went into hiding.

Shesaid all efforts to retrieve the money from Walker proved futile, but he was last Sunday arrested at his hideout, at Tabora, in Accra.

DSP Tenge said the investigation revealed that the suspect is not a military officer, and GH¢2,000.00 has been retrieved from him.