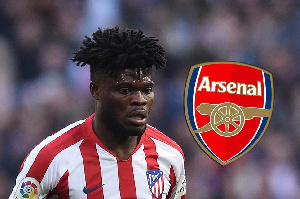 Arsenal manager Mikel Arteta has indirectly fired a warning shot to Atletico Madrid midfielder Thomas Partey that he is only interested in recruiting players who have a strong desire to don the Gunners shirt.

Partey has been identified by Arteta as a priority target this summer, with the Spaniard keen on adding greater defensive cover in his central midfield, though the coronavirus pandemic is likely to limit the amount they will be able to spend on recruiting the player.

The Ghana international is said to be courting interest from Premier League rivals Manchester United but reports suggest that the player has his heart set on a move to the Emirates Stadium.

According to Arteta, he shouldn’t have to do much to persuade Partey and his other targets to sign for the club.

“The moment we mention Arsenal, Ian you know what it means around the world,” Arteta told Gunners legend Ian Wright in an interview on Adidas UK’s Twitter account.

“Everybody wants to come here and we have a really clear idea of what we are.”

“It doesn’t need much convincing and if they do, for me it’s not a good starting point. If I have to convince a player to stay or to join us. To Arsenal? It holds me back a little bit.”

“It has to be ‘what do we have to do? I want to play for that club and represent exactly the values the style of play that I want’. That’s the kind of emotion I want to hear at the start.”

“The same with the players that are here. Once you finish what are the feelings you have towards the club? That’s what really interests me.”