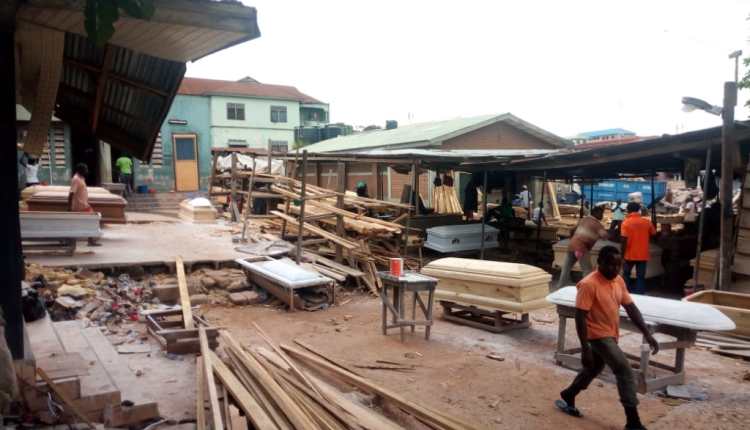 Coffin Makers at Asafo Labour in the Kumasi Metropolis have threatened to fight officials of KMA with coffin over what they described as “forcibly ejection” by the authority.

The Coffin Makers who marched in their numbers to the premises of OTEC FM on Monday December 6, 2021 to protest their eviction said the KMA has given them until the end of December 2021 to move out of the area they are currently plying thier trade.

But the coffin makers, however, says they will not move until they have alternative space for thier work.

Speaking to OTEC News Kwame Agyenim Boateng one of the leading members of the group, Mr Effah Poku said although they are not against the development, they will not move an inch until their interest is addressed by the authorities.

“We believe the decision by KMA to evict us was ill-implemented because there is no alternative place to accommodate us”. He added.

“They should not forget we are coffin makers, and I can assure them that we are ready to  fight to any length even if it means fighting them with our coffins ”

The group have therefore appealed to officials of KMA to as a matter of urgency address their concerns before they are move to evict them from the place to avoid any bloodshed.