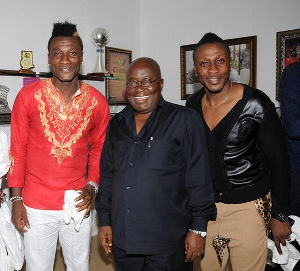 Addressing the narrative that he is affiliated with the party, he said he was born into an NPP family.

Speaking with Som Pa TV, he explained that his father was related to Ghana’s second Prime Minister, Kofi Afrifa Busia.

“My family has a link with NPP because Busia employed my dad, he brought him from Wenchi to Accra. So, I was born in Accra and that is why people tag me as such, which I do understand,” Gyan remarked.

He clarified that he is neutral and has opened his doors to work with any party that comes into power.

“For me, I’m neutral. If NPP offers me a duty to perform, why not? I’m a patriotic citizen and I think about the people… So any government that feels I can help with a course and chooses me to lead, I’m ready,” he said.

The New Patriotic Party had its roots in the United Gold Coast Convention and the United Party of which Dr Kofi Abrefa Busia was one of the main figures.

Busia served as a Member of Parliament for Wenchi. Asamoah Gyan hails from Wenchi, a town in the capital of Wenchi Municipal of the Bono Region.

The former Black Stars captain is adored in Ghana for his legacy with the national team.

He is a businessman and a philanthropist who has exercised his social corporate responsibilities in several ways, contributing to the development of the county.

In 2020, he disclosed that he has not thought of becoming a politician but people were calling on him because of his good works.

“I’m happy that people are grateful for what I have done. I said earlier that people want me to become their MP,” he told Adom FM.

“The most important thing is that people are happy with what I have done. Talking about politics anything can happen, but for now, politics is not on my mind. Sometimes the people choose you, people can choose you to lead them. When the roads were going on plus other projects, many people were urging me to lead them as their MP,” he added.