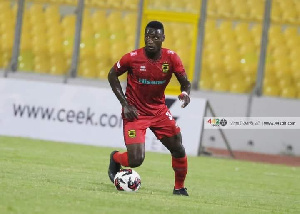 Asante Kotoko midfielder Salifu Mudasiru is set to leave the club when his current contract expires in June, according to reports.

Mudasiru joined Kotoko on a three-year contract in June 2019, and there have been no talks about an extension as the contract nears its end.

Since the start of last season, Salifu has established himself as one of the truly best players in the Ghana Premier League.

This season, he has been instrumental in Kotoko’s impressive run in the top flight. The Porcupine Warriors have a good chance of winning the league.

They have an eight-point lead at the top with ten games remaining, having faced the majority of the difficult teams.

The 25-year-old has one goal and one assist in 21 league games for Kotoko.

Mudasiru is worth €125,000, which is more than one million Ghana cedis, according to transfermarkt.