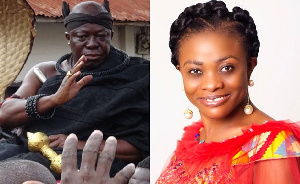 Gospel music and minister of the gospel, Diana Asamoah has made a plea to Asantehene Otumfuo Osei Tutu II to take charge of the burial and funeral service of the late British monarch, Queen of Elizabeth II.

The queen who reigned for 70 years passed away on September 8 at age 96. The world and its leaders have mourned Queen Elizabeth, the longest-serving British monarch.

Reacting to the news of her death and plans for her final funeral rites, Diana Asamoah in a video shared on TikTok just a day after the queen’s passing requested that Ghana’s president, Nana Addo Dankwa Akufo-Addo and the Chief of Staff, Frema Opare ensured that Asantehene took charge of the burial since the Ashanti Region holds the record as the best funeral organizers in the country and the world at large.

“I just have a little plea to make to our King, Asantehene, Osei Tutu II, president Akufo-Addo and Frema Opare,” she said in the video that captured her in a black dress.

The gospel explained that in 2021, the funeral of Prince Philip, Duke of Edinburgh, husband of the late Queen wasn’t befitting for his status as a British royal reason why Asantehene must be handed over that duty.

“We all witnessed the great and befitting funeral organized for the late Asantehemaa. I say that we weren’t impressed with the funeral of Queen Elizabeth’s late husband…as for the Queen’s funeral, I am on my knees begging the Asantehene to take over the organization.

“It is a fact that we the Ashantis are the best organizers of funerals, so I plead with Asantehene to take over. The late Queen is a royal and so, we the Ashantis should give her a befitting burial…I am even prepared to sponsor it. Please act on it else they will ruin it. I thank you in advance for considering my request,” Diana Asamoah concluded in her message to Otumfuo.

Meanwhile, the Manhyia Palace in a Twitter post on September 9, mourned the passing of Queen Elizabeth II.

Previous Former Audit Service Director burnt to death, 5 others injured
Next LIVESTREAMED: Charles III takes oath as he is proclaimed King of England