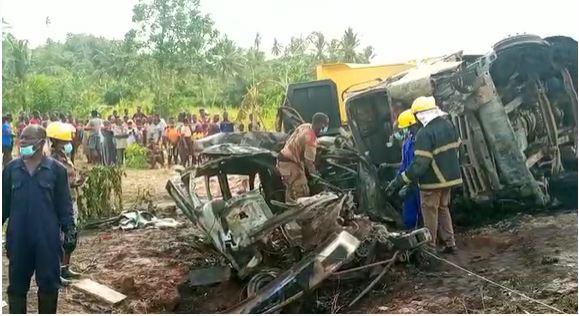 Nine out of fourteen passengers who got burnt in a car accident at Asemase on the Cape Coast to Takoradi road on Tuesday have been identified by their relatives at the Cape Coast Teaching Hospital.

Authorities of the Cape Coast Teaching Hospital on Thursday March 24 allowed people to identify the bodies of their deceased relatives.

Speaking in an interview with EIB Network Central Regional Correspondent Yaw Boagyan, the Public Relation Officer for the Cape Coast Teaching Hospital Mr. Fredrick Nyankah said out of the nine bodies identified, five were female and four were male but there was contention among some families members on one particular female burnt body.

He said due to the controversies, the Hospital authorities have decided to run a forensic blood test by the Central Regional Criminal Investigation Team for the remaining six burnt female dead bodies.

Meanwhile, some relatives of the deceased persons explained that they were able identify the charred bodies of their family members due to the goods they were carrying with them in the Ford bus.