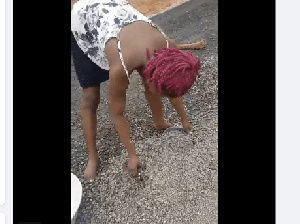 Some residents of Asokore Senchi have been captured in a viral video scrapping stones from their newly constructed roads.

The residents say they are going to use the stones from the road which construction is currently ongoing, to fill roads leading to their home and their bathrooms because they are muddy.

To them, that’s the only benefit they will derive from the President of Ghana Nana Addo Dankwa Akufo-Addo since they voted for him to become President.

However worrying the situation is, persons, involve seem not to see anything wrong with what they were doing while the video was captured.

To them, the contractor will come back to the site to continue with the work and therefore there is the need for them to take advantage and scrape the stones used for the first quote of the work on the road.

One of the residents who was captured in the video is heard telling the young man who captured the video that “this is our government so when the NDC comes you can also do the same.”

The video has sent shocking waves down the spines of many Ghanaians who have expressed concerns about patriotism in Ghana.