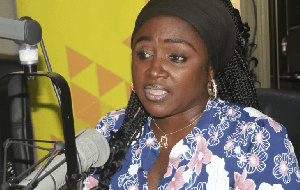 The opposition National Democratic Congress (NDC) will not withdraw from the Assin North by-elections as it did during a similar one at Ayawaso West Wuogon, says Dr Hanna Bisiw.

The NDC national women’s organiser made this statement on Ideas Exchange hosted by Eric Ahianyo on TV XYZ.

The former minister’s comment comes on the back of a Supreme Court ruling that restricted James Quayson from holding himself as MP for the Assin North Constituency in the Central Region.

The Supreme Court has, in a majority 5-2 decision, ruled that Assin North MP, James Gyakye Quayson, can no longer perform Parliamentary duties.

But Hanna Bisiw believes should there be a by-elections, the governing NPP should dare not adopt violence since the NDC will meet them squarely.

“We ain’t going to withdraw. We shall go till the end. It is a do or die affair for us, ” she said.