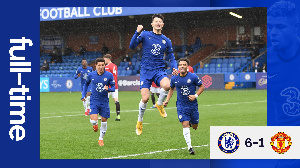 Defender Baba Abdul Rahman was in action this afternoon and helped the Chelsea U-23 team to post a thumping 6-1 win over the Manchester United U-23 team.

The Blues development squad hosted the Red Devils counterpart this afternoon for a matchday 11 encounter in the 2020/2021 English Premier League 2 season.

Having merited a starting role for the home team, Baba Rahman, impressed with his combination of solid defensive play complemented with purposeful attacking runs into the half of the opponent.

In the end, his contribution played a key role for the Chelsea team to thrash Manchester United to stay top of the Premier League 2 standings.

On the matchday, Marcel Lewis and Faustino Anjorin both netted a brace for Chelsea, while Jude Soonsup-Bell and Charlie Brown added the other two goals.

In the final 10 minutes of the game, Joe Hugil netted the only consolation goal for the Manchester United team.

Baba Rahman, 26, played 69 minutes of today’s game and is looking forward to a move away from Chelsea in the January transfer window.