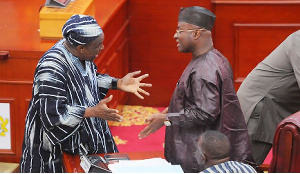 Majority Leader and Minister for Parliamentary Affairs, Osei Kyei-Mensah-Bonsu has disclosed that Speaker of Parliament Alban Bagbin continues to approve of motions even during his absence from the country.

Kyei-Mensah-Bonsu, who is also MP for Suame in the Ashanti Region disclosed to journalists in Parliament that the Speaker – who is absent on medical grounds – had directed for motions to be sent for approval.

With Bagbin currently in Dubai, the Majority Leader cited this development to emphasize how he had refused to delegate weighty responsibilities to his deputies whiles he is away.

“It tells you a Deputy Speaker is not the Speaker, and does not assume full responsibility in the absence of the Speaker,” Kyei-Mensah-Bonsu stated.

In the light of the recent Supreme Court ruling on the voting and quorum rights of Deputy Speakers, the Suame MP said he agreed with the position of the apex court which ruled that sit-in Speakers could vote and could be counted to form quorum.

He cited the Constitutional position on Speakers having no vote and buttressed it by explaining that the constitutional imperative in Article 104 (2) is for the Speaker alone.

“That was the initial contention. Subsequently, they are finding refuge in Order 109 (3) which provides that Deputy Speakers, when they are presiding, will not have their original votes,” he stated.

“And that is what it is. Deputy Speakers are not the Speaker. If you are saying that Deputy Speakers, for reasons that they are called Mr. Speaker when they preside, then they should go with all the entitlements and accompaniments of the Speaker,” he insisted.

Though Kyei-Mensah-Bonsu has not indicated which exact motions Bagbin had asked to be transmitted to him, it emerged in December 2021 through the Majority Leader, that Bagbin had endorsed a motion filed by Minority NDC MPs as part of the effort to get the approval of the 2022 budget by the Majority NPP rescinded.

Bagbin oversaw a rejection of the 2022 budget which vote was boycotted by the Minority, he traveled for medical check up the day after.

The Majority side with First Deputy Speaker, Joe Wise, presiding, also reversed the rejection and proceeded to approve the budget.

It was a move to reject the budget again by the Minority that purportedly led to Bagbin okaying a motion whiles he was away in the UAE.