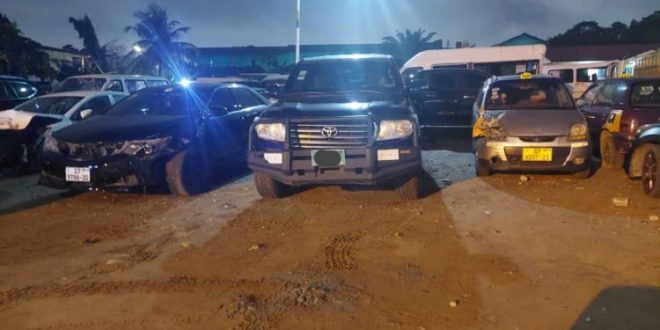 The police have impounded a vehicle belonging to the Bank of Ghana as part of Citi TV‘s War Against Indiscipline (WAI).

This was after the driver of the vehicle was arrested at the Airport bypass for using sirens and driving on the wrong side of the road without a justified course or emergency purpose.

The driver confessed to using the siren to beat traffic, explaining that the vehicle had developed a fault.

Upon further interrogation by the Police Motor Traffic and Transport Department (MTTD) team, the driver could not justify his reason for the misconduct.

The vehicle is currently at the Airport police station with the driver expected to be in court tomorrow, Tuesday, September 20, 2022.

So far, about 40 drivers have been convicted and fined various sums of monies ranging from GH¢300 to GH¢3000 since the campaign was brought back last week.

110 vehicles have also been impounded for various road traffic offences.

Key among the offences is illegal U-turns on the Tema motorway.

Seven vehicles were stopped when the War Against Indiscipline team mounted a snap check on the Tema motorway, while four other drivers were arrested at the East Legon under the bridge.

Some drivers gave the following reasons for the continuous use of unauthorized turns on the motorway.

“We were in a haste to attend a training in Tema, so we decided to make a U-turn, so we could make it in time,” a driver shared.

Another driver said, “I am a medical practitioner and I had to make it in time for work. I had no intention to cause mayhem.”

About War Against Indiscipline

It is a Citi TV initiative in partnership with the Police MTTD.

In May 2019, the station began the campaign against all forms of indiscipline in the country.

It covered roads noted for reckless driving within and outside Accra.

The campaign is aimed at checking indiscipline on roads and also targeted at putting regulatory bodies on their toes to ensure that the various road safety laws are enforced.

It also seeks to compel drivers to stay within speed limits.