Home / POLITICS / Bawumia does not have roots in NPP – Kwesi Pratt 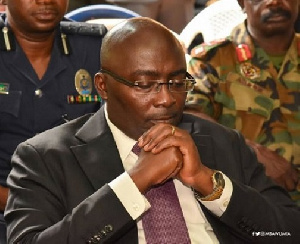 The Managing Editor of the Insight Newspaper, Kwesi Pratt Jnr, has commended the “Aduru Woso Health Walk” organized by supporters of Alan Kyerematen in Kumasi over the weekend, describing it as an impressive turnout amid an economic crunch.

In an interview on Accra-based Peace FM, the veteran journalist opined that the only thing which took the shine off the event were concerns about Hopeson Adorye’s comment regarding Dombo’s (Northerners) in the New Patriotic Party (NPP).

Hopeson Adorye referencing the tradition of the party, sought to justify why it is now the turn of Alan Kyerematen to lead NPP.

He said Dombos (Northerners) have always paired with Danquahs and Busias as running mates in elections – a comment which has triggered heated debate with some labeling it as ethnocentric and anti-Northerners.

Commenting on the development, Kwesi Pratt said the statement of Hopeson Adorye was of great concern, adding that some persons in the NPP do not belong to any faction.

According to him, people like Vice President Dr. Mahamudu Bawumia for example belonged to the Convention Peoples Party (CPP) and thus does not belong to factions in the NPP.

He explained that Dr. Bawumia only got his NPP membership card because the party wanted him to become its Vice Presidential candidate.

Kwesi Pratt also agreed former NPP Communications Director, Nana Akomea, who said that the party does not elect its leaders based on factions.

“If you take the Vice President [Dr. Mahamudu Bawumia], he is not from Dombo neither is he from the Danquah. He does not come from [any of] the traditions. He is from CPP who has joined. If you listen to some of the NPP stalwarts, Bawumia’s membership card was given to him just because they wanted him to become Vice President. So for him, he’s not a Dombo neither is he a Danquah or Busia. He doesn’t fit into any of the categories,” the veteran journalist stressed.

The NPP is expected to elect a flagbearer for the 2024 elections next year.

Tags BAWUMIA DOES HAVE IN Kwesi Pratt not NPP roots