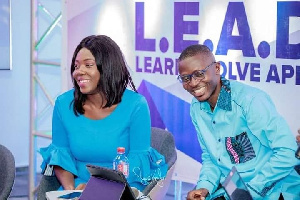 News coming to GhanaWeb’s attention is that the wife of award-winning journalist and former Journalist of the Year, Bernard Avle, has died.

His wife, Justine Avle, is reported by multiple online platforms as having died on the evening of Wednesday, August 3, 2022.

Details on exactly what killed her are sketchy, except for the fact that she died after a short illness.

Many social media users have expressed their condolences following the shocking news, praying for strength for the journalist.

They are said to have been blessed with four children, reports mynewsgh.com.

Bernard Avle is the General Manager of Citi FM and host of the Citi Breakfast Show on Citi FM, as well as the Point of View Show on Citi TV.

Mr Avle, whenever he is heard talking about his wife on air, always referred to her as his biggest inspiration.

Previous VIDEO: Meet the 78-year-old man with 32 children, living with a 35-year-old wife
Next VIDEO: Nana Konadu and Akufo-Addo boogie down at the Founders’ Day Luncheon