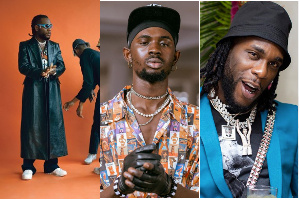 In an interview he recently granted on TV3, he says that his collaboration with Burna Boy is ‘very big’ for his career because he has many songs that he is yet to release. He says that this would give him an opportunity to obtain more attention for the songs.

According to Black Sherif, a popular Nigerian dancer who is also a die-hard fan of his, named ‘poko’ had played his song, Second Sermon to Burna Boy and the latter loved the song. Later, a member of Burna Boy’s team contacted him on Whatsapp and he was very shocked by that.

He said, “I don’t know who played my song to Burna but I think it’s Poko…..he’s been touring with Burna……Burna loved the song…someone from Burna’s team reached out to me on Whatsapp.

The Second Sermon hitmaker proceeded to say that he later spoke to Burna Boy via video call. He says that he spoke with Burna Boy for about twenty minutes, and the latter advised him almost throughout.

He says that he later learnt that Burna Boy loved Second Sermon so much that he played it to all his friends also everywhere he went, and it was sometime after their first interaction that they began to talk about doing a remix of the second sermon.

Currently, the Second Sermon remix is available on almost every music platform, and Burna Boy has recently tweeted that he will be going on a world tour with Black Sherif soon.