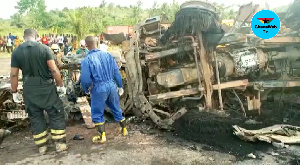 An eyewitness account has emerged detailing how the accident at Asamase happened on March 22, 2022.

Reports on Tuesday evening indicated that some over 14 persons were feared dead following a ghastly accident at Asemasa near Beposo in the Shama District in the Western Region.

According to reports by Connect FM, the fatal accident happened when a truck and a Tarkwa to Accra-bound vehicle collided head-on, causing a fire that led to the burning of some passengers.

A commercial driver who was several cars behind the tipper truck which run into the Ford vehicle spoke to GhanaWeb after the incident. He explained that the heavy-duty truck, which was carrying stones lost balance after one of its tires got burst.

In the process, it skidded off the road and ran straight into the Ford vehicle which was oncoming on the opposite side of the road.

According to him, the Ford caught fire, and the flames which were uncontrollable burnt the passengers of the Ford vehicle.

“I sped past the truck and parked a little ahead because my passengers said they were pressed and wanted to urinate since it was a long journey so I parked.
“The truck then went past us and I was the seventh car after it. All we heard was an explosive sound after its tire got burst and lost balance.”

“It was swinging on the road and then headed towards the Ford. It ran into the Ford car and it was not an instance of overtaking.”

“Once the truck ran into the van, there was fire and it was uncontrollable. We couldn’t come close because the fire was blazing. The heat was unbearable,” an eyewitness said.

Meanwhile, police say they have launched investigations into circumstances leading to the death of the 14 passengers involved in the accident.

Speaking to GhanaWeb, the Western Regional Commander of MTTD, Chief Superintendent Isaac Kwasi Sokpa noted that the Ford bus with registration number, GW-6628-21 loaded from Tarkwa and was heading to Accra.

“The dead are made up of four females including a small girl and a white lady and ten males,” he said.

Chief Supt. Sokpa also noted that the driver of the truck and his mate survived the accident and are currently receiving treatment at the Central Regional Hospital in Cape Coast whilst the burnt bodies have been conveyed to the morgue in Cape Coast.