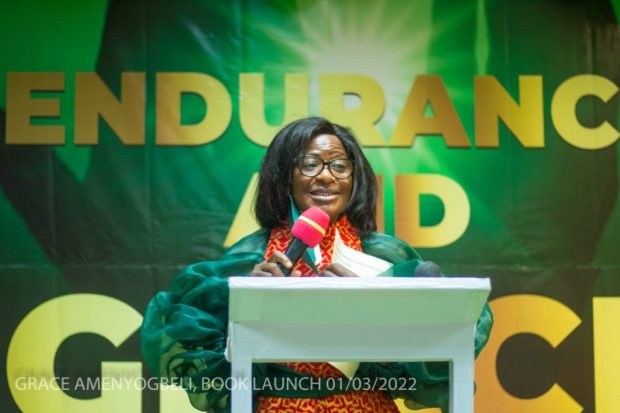 A book detailing the life journey of an accomplished woman to encourage and inspire people has been launched in Accra.

The 203-book, titled Endurance & Grace Personified, by Madam Grace Amenyogbeli recounts her life experiences, trying moments, and how she was able to overcome those challenges.

According to the author, Madam Amenyogbeli, who is an experienced administrator and had worked with both local and international organisations, the book recalls how she enjoyed her early years of marriage before problems started setting in.

“Indeed, everybody has a life’s story and so I decided to publish mine primarily to encourage somebody,” she said.

Book Launch
Madam Amenyogbeli made the observation during the lunch of her maiden book—Endurance & Grace Personified—on Tuesday, March 1, 2022.

She explained that the book has been carefully written to trumpet gratitude packaged with her soul to all those who contributed during her critical moments in her life’s journey some of whom she christened “strategic helpers.”

“My dear ones, everybody needs a shoulder to lean on,” she intimated.

Rationale
“I gathered the courage to write such a detailed account of my life for public consumption because I considered it a sacrifice for humanity to extract some salient lessons which might guide some lives.

I believe the journey of life is not only shaped by one’s own experiences, but those of others as well. Much as it is difficult, I thought it would be of no value either if I closed up. However, I was careful not to impose any on the reader. I respected the fact that people are different, with different aspirations and different perspective on issues,” the author further said.

With different perspectives, she noted that one might describe a half-filled cup with substance as half empty, while another will see it as half-full, leaving readers to construct their own lessons.

Madam Amenyogbeli was hopeful that readers of her book will have something useful from her memoir to enrich their lives.

That notwithstanding, she bemoaned her inability to express what she termed the “state of my being” anytime she found herself in distress.

“I always encourage myself in the Lord like David did by singing a particular song from the deepest part of my soul and immediately experience some relief. I attempted to capture it somehow on page 58, the last paragraph though,” she revealed.

The author of Endurance & Grace Personified underscored the need for every woman to be strong and forge ahead with their heads lifted up in the midst of trouble.

According to her, she has resolved to dedicate the proceeds from sale of the book to her foundation—Sena Aku Memorial Foundation, which she named after her daughter.

The Chairman of the Foundation, Mr. Benjamin Anim, disclosed that the foundation was formed in 2012 in memory of Sena Anku to help educate and offer assistance to young professional women in the area of cancer, with particular emphasis on breast cancer.

Sena was an accomplished International Executive MBA holder in Banking and Finance with Paris Graduate School of Management, Credit and Risk Management at Stanbic Bank Training School and indeed a hallmark of an achiever.

However, she succumbed to cancer at age 28 after several attempts at treatment. Among organisations where she has worked included African Women Development Bank, Sugar National Violent and Technoserv.