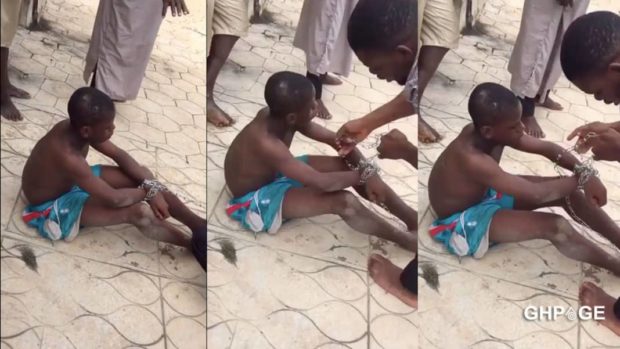 Boy arrested for trying to kill mother for money rituals

The quest to become rich overnight has been the main aim of some youth in the world especially after they have seen their age mate succeed and they feel they are being left behind.

A young man is currently in the custody of the Police after he was caught in the act of trying to kill his mother for money rituals.

According to eyewitnesses, the young boy was caught in the act whiles he was stabbing his mother with a sharp object.

In the video available, the young boy could be seen tied with chains while another man was seen warning him against engaging in money rituals.

Previous You are naive – Ghana Immigration Service fumes at Kevin Taylor
Next PHOTOS: Obour delivers fresh flowers to First Lady on a bike