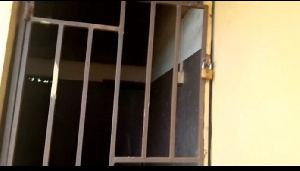 Breman Kuntanase, a community in the Asikuma Odoben Brakwa District of the Central region, is under health threat due to the lack of a decent toilet facility in the area.

The residents used to attend to nature’s call in a modern latrine constructed within the locality but have for the past two years resorted to indiscriminate means to ease themselves.

This is because the only facility serving the whole community has been locked up.

The authorities locked up the toilet following the breakdown of the engine of the mechanised borehole which aids in pumping the water to the poly tank for use.

The situation is said to have forced members of the community to resort to defecating in open places such as river banks and bushes while others use polythene bags.

For convenience’s sake, many have also opted for the use of chamber pots but later empty them in streams.

Angel News’ Kwame Owusu Asante Shardrack’s visit to the community uncovered that the local authorities in the area locked up the facility to allow for repair works.

However, the delays in the repair work is creating discomfort among the residents.

A male resident said, “now the situation is so dire that if you don’t have a toilet facility in your home then you have to choose the bush. People have been defecating anyhow which is a worry to us.

“People defecate in the surroundings of our only big stream we have here so we now find it difficult drinking from the stream, so sickness is nothing to write home about in this community.

“The males here defecate indiscriminately at open places whereas we the females resort to polythene bags and dump them in our dustbins before taking them to the refuse dump,” an elderly woman expressed in the Twi language.

Another male resident who added his voice to the concerns raised explained that they are left with no other choice than the open defecation because of the unavailability of toilet facilities in Breman Kuntanase and its environs.

The residents, therefore, expressed worry over their practices which they consider to be hazardous to their health and fear that a deadly disease may break out in the area.

The residents of Breman Kuntanase however called on the government and other benevolent organizations to consider the health threat they are exposed to and come to their aid.

The assembly member for Breman Kuntanase electoral area, Patrick Ebo Quainoo, who could not hide the several frustrations he encountered in an attempt to ensure the problem was solved, said all his persistent efforts proved futile.

He added that “we have four toilet facilities in the community but three had already become dysfunctional so it was only left with this particular one that was in use until it also became malfunctional with the problem.”

According to Mr Ebo Quainoo, although the situation is appalling, the facility will be opened for reuse when the broken mechanised borehole system is fixed.

He also appealed for public support to help resolve their plight as unceasing open defecation is causing serious health risks to the residents.