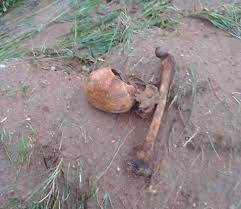 As a result of heavy rain in Durban, bones of some of those buried at a cemetery in Ntuzuma D section, at Lindelani informal settlement, have been exposed.

The area has been severely affected by the heavy rains.

The cemetery has flooded, leaving some graves excavated.

Residents of the Lindelani informal settlement in Ntuzuma community living near the cemetery have shared the news on different social media platforms, with photos and videos.

Residents are alleging that coffins and bones are scattered all over the area, including the roads near the cemetery, saying that people who have family members buried there should go check on the graves.

Mayor of eThekwini municipality, Mxolisi Kaunda, has confirmed these allegations and that the municipality has received these reports.

“Due to heavy rains, some cemeteries have had a lot of soil erosion resulting in buried bodies being exposed. We understand that this is highly traumatic for families and communities. The Municipality has put together a task team that has already begun to attend to the impacted cemeteries,” said Kaunda.

Kaunda added that the City will unfortunately not be able to accept any request for burials until the weather clears.

“This is due to the ground being saturated as a result of the heavy rainfall. The City calls on the public to postpone any burials until such time that the city cemeteries are able to conduct these again,” said Kaunda.

The mayor asked members of the communities, business people, churches and religious fraternities to come on board and assist wherever possible.

“We need all hands to ensure that we save lives and also help those who are in need of immediate interventions like food,” said Kaunda.

Previous Ghana Meteo issues rainstorm alert for parts of Volta, Oti and Accra regions
Next All set for full trial of Jomoro MP