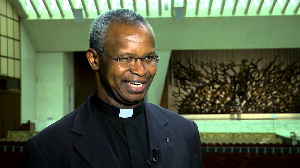 Months after his elevation to the position of a Cardinal by the Holy Father, Pope Francis, the Bishop of Wa, His Eminence Richard Kuuia Baawobr, has been elected head of the Roman Catholic Church in Africa.

His election came at the end of the Symposium of Episcopal Conferences of Africa and Madagascar, SECAM, which took place in Accra.

By his election, the cardinal-designate is now the highest-ranking member of the Roman Catholic faith on the continent. It is the first time in SECAM’s history that a Ghanaian has been elected leader.

He takes over leadership of the association of Catholic Bishops of Africa, Madagascar, and the Islands, from His Eminence Philippe Cardinal Ouédraogo from Burkina Faso

The new head will be assisted by His Eminence Fridolin Besungu Ambongo of the Archdiocese of Kinshasa, in the Democratic Republic of Congo and Most Rev. Lucio Andrice Muandula of the Diocese of Xai Xai, in Mozambique, as First and Second Vice Presidents respectively.

The clergy men assembled in Ghana since last week for the 19th Plenary Assembly of SECAM, attended by 130 participants, including cardinals and bishops drawn from across the continent.

President Akufo-Addo was the guest of honour at the opening ceremony of the gathering which ended with the election of new leaders.

Established in 1969 in the Ugandan capital, Kampala, during a visit by Pope Paul VI, the primary aim of the SECAM is to allow Bishops to speak with a common voice on matters affecting the Church in Africa.

Appointment as Cardinal and Profile of Rev. Baawobr

In late May 2022, the Most Reverend Richard Kuuia Baawobr was appointed a Cardinal by the leader of the church, Pope Francis.

Bishop Baawobr was among 21 bishops who will be enlisted into the Consistory of the church come August 16, 2022, by the Pope.

Known in Ghana and across Africa for his charity works, Bishop Baawobr is a member of the Society of the Missionaries of Africa who has distinguished himself as having immense love for persons suffering from mental health challenges and individuals abandoned by their families.

He had his secondary education at the Nandom Secondary School. In 1979, he went to St. Victor’s Major Seminary at Tamale as a Diocesan Seminarian.

He joined the Society of Missionaries of Africa (M.Afr.) in 1981 after his Philosophical Studies. Bishop Baawobr is one of the only two Africans out of the 21 bishops who will be appointed cardinals by the Pope on August 16.

This new position will make him a member of the Catholic Church Council which among other things is responsible for electing a new Pope upon the retirement or demise of a current pope.

He follows the footsteps of Former Archbishop of Tamale, Cardinal Peter Dery and Cardinal Peter Appiah Turkson as the third Ghanaian to be appointed a Cardinal of the Catholic Church.

Previous Bono East: Five arrested over chaos at NDC regional office; one on admission
Next Only a government ready to lose power can effectively fight galamsey – Ken Agyapong