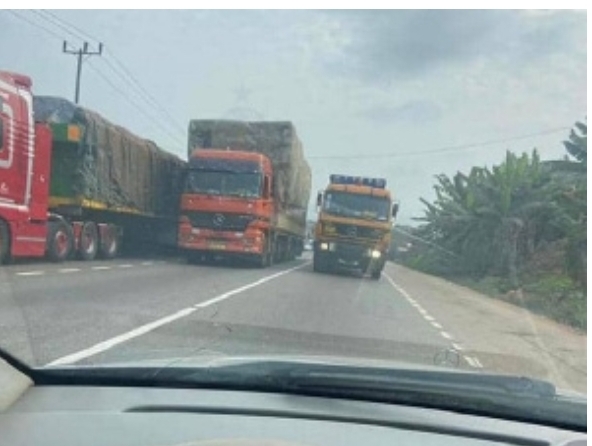 A 31-year-old driver who was captured on camera and reported on social media for recklessly overtaking other vehicles on the Accra-Kumasi highway has been arraigned before court.

A staff of the Ministry of Information, George Sarpong on Tuesday, January 4, 2022, reported on social media about how a driver of a long truck with registration number GW 402 V had recklessly overtaken other cars at Kwahu Fodua along the Accra Kumasi Highway.

He called on the Ghana Police Service to bring the driver to book for endangering the lives of other road users, Mr. Sarpong wrote “Dear Ghana Police Service, on my way to Accra (from Kumasi) on Thursday, December 30, 2021, this long vehicle with registration number GW 402 V, did this reckless overtaking at Kwahu Fodoa at about 9:41 am.

“The driver literally pushed oncoming vehicles off the road, a situation that could’ve resulted in dire consequences for road users who were caught in this mess.”

Barely 24-hours after the report was made on Facebook, the Ghana Police Service has announced that it has identified the driver in question as one Awal Mohammed and have gone ahead to arrest and charge him with multiple offenses.

Among others, the police say the suspect has been charged with driving on the wrong side of the road, careless and inconsiderate driving and causing danger to other road users. The suspect according to police is set to be taken to court to answer to the charges.

Read the police announcement below:

A suspect driver, Awal Mohammed, aged 31 has been arrested and charged for court for the following offences:

The said driver was captured on video by a concerned citizen as he dangerously veered off his lane at a section of the road at Kwahu Foduah, and drove facing oncoming vehicles.

We wish to commend the good Samaritan for volunteering information leading to the arrest. We wish to further caution motorists to drive with due care and attention at all times to avoid road traffic crashes.