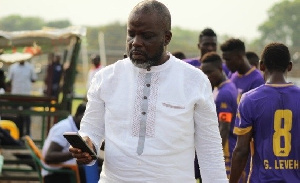 The Court of Arbitration of Sports (CAS) will today, Tuesday, August 4, announce the ruling on the case between Wilfred Osei Palmer and Ghana Football Association (GFA).

Palmer was disqualified from the GFA Presidential race based on the fact that he did not pay 10 per cent of Joseph Paintsil’s transfer fee to Belgian side Genk.

He protested and marched to CAS in October 2019 to seek justice.

CAS originally scheduled July 17 to settle the score but the verdict was pushed to August 4 due to the coronavirus pandemic.

August 4 is here and Palmer and the GFA have their hearts in their mouths as to who will come out victorious.

What will happen if Palmer wins the case?

Should Palmer win, the GFA Presidential election will be held again and just maybe he will triumph.

If he doesn’t win the case, Kurt Okraku will still be President of the GFA and carry on with his duties.

All await the verdict.