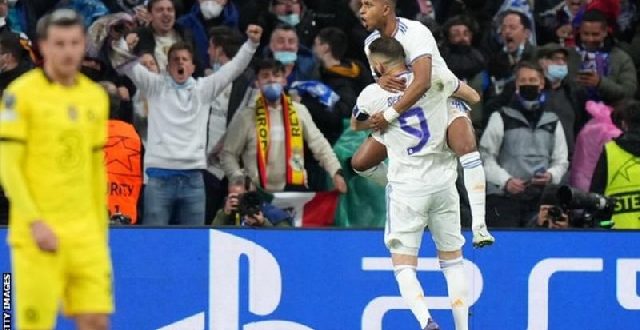 Chealsea kicked out of Champions League

Chelsea’s reign as European champions came to an agonising end despite beating Real Madrid on a night of high drama at the Bernabeu Stadium.

Thomas Tuchel’s side were outstanding throughout and Timo Werner’s clever finish from an angle put them ahead for the first time on aggregate and within sight of a place in the semi-finals.

But substitute Rodrygo – after a stunning pass by Luka Modric – forced extra time with a volleyed finish before Karim Benzema, a hat-trick hero in the first leg at Stamford Bridge six days earlier, headed the decisive goal in the 96th minute to send Real through 5-4 on aggregate.

Benzema, who had earlier headed against the bar on a rollercoaster night, was unmarked when he scored to break Chelsea’s hearts after Rudiger slipped inside the box.

Even after what turned out to be the clincher, Hakim Ziyech, Kai Havertz and Jorginho went close to forcing a penalty shootout.

In the end Chelsea, who played superbly, were made to pay for their first-leg performance as Tuchel’s side fell just short of producing one of the great comebacks in the competition.

Many of Chelsea’s players slumped to the ground at the end of 120 gripping minutes after pushing record 13-time winners Real – who will face Manchester City or Atletico Madrid in the last four – all the way.

Tuchel had said on the eve of this game that Chelsea’s progression into the semi-finals would be akin to the best Hollywood script.

His players came close to producing a blockbuster in their first game at the Bernabeu in European competition as they showed incredible fight and belief – ingredients which were missing from their poor performance in the first leg.

This breathless game had everything and more, including a Marcos Alonso goal at 2-0 ruled out by the video assistant referee for handball.

While Tuchel will be delighted with the way his players responded, there will be concern at how much the energy-sapping 120 minutes has taken out of them.

Chelsea do not have long to recover from going out of Europe as they prepare to make a second visit of the season to Wembley.

They face Crystal Palace in an FA Cup semi-final on Sunday (16:30 BST) – a competition that offers them their last chance of landing a major domestic trophy.

Despite enjoying success in the Fifa Club World Cup and Uefa Super Cup, they lost a penalty shootout to Liverpool in the Carabao Cup final and are 12 points behind leaders Manchester City in the Premier League with just eight matches left.

Previous At least 20 feared dead in South Africa due to heavy rainfall
Next Wesley Girls to UG and beyond: Five facts about Odartey Lamptey’s lawyer