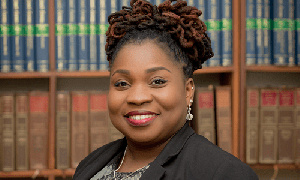 Wesley Girls to UG and beyond: Five facts about Odartey Lamptey’s lawyer

Nii Odartey Lamptey, was a newsmaker decades ago when he played for the country as a young and talented footballer, who went on to play outside of the country.

The last few weeks have seen him return to the front pages after a High Court settled protracted divorce litigation that lasted almost a decade with his former wife, Gloria Lamptey.

While all the spotlight was on Odartey Lamptey for the success that he chalked in the court, nothing was heard about the legal team that defended his interest and his case.

Court documents list his lawyer for the better part of the trial as Iris Kwegyirba Aggrey-Orleans.

GhanaWeb looks at five major things about the seasoned and ‘competent’ trial lawyer:

1 – Former student of Wesley Girls Senior High School, she had her secondary education at the top all-girls SHS located in Cape Coast between 1998 – 2000.

4 – Next stop was the University of California, Berkeley from where she got her Master of Laws (LLM) in Commercial Law between 2013 – 2014. She specialized in M&A, Antitrust, Securities and International Business Transactions.

5 – She is currently a Managing Associate with Beyuo & Company. She started out with the firm in November 2010 till date.

Her work is mainly in civil litigation, alternative dispute resolution and corporate transactions. She is also a volunteer with the Legal Aid scheme of Ghana.

What Iris says of herself on her LinkedIn Page:

I am a competent trial lawyer who has represented and advised various individuals and institutions in a wide range of areas including matrimonial & custody matters, international child abductions, probate and estate disputes, shareholder and company disputes, land/property disputes and labour and human resources related matters.

Integrity and excellence are my watchwords, and I aim to give clients the best experience while providing a speedy and effective resolution to their legal issues.

Tags AND BEYOND GIRLS to UG WESLEY