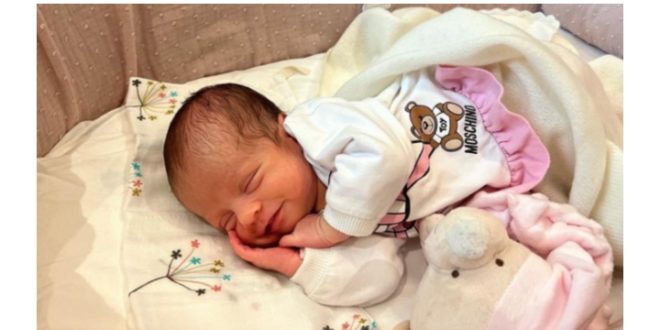 Cristiano Ronaldo’s partner has revealed the name of their newborn daughter is Bella Esmeralda.

Georgina Rodriguez posted a picture of the baby in her cot – and apparently smiling – on Instagram on Saturday afternoon.

She’s pictured in a designer baby grow by Moschino and the caption includes a green heart and “180422” for her birth date.

The image received more than two million likes in just one hour.

Ronaldo last week posted a photo of himself and his daughter, entitled “Forever Love”, but her name was not disclosed until today.

Bella’s male twin died during the birth on 18 April, with the Manchester United and Portugal star writing that it was the “greatest pain that any parents can feel”.

“Only the birth of our baby girl gives us the strength to live this moment with some hope and happiness,” he said on Instagram.

It led to an outpouring of support from fellow players and fans, and Ronaldo later thanked Liverpool fans for a minute’s applause held at Anfield.

Ronaldo already has a four-year-old daughter with Ms Rodriguez, as well as three other children.

Previous Stop your intense hatred for Akufo-Addo – Obiri Boahen to Wereko-Brobbey
Next My daughter, Farida is not on Twitter; don’t follow any account in her name – Mahama