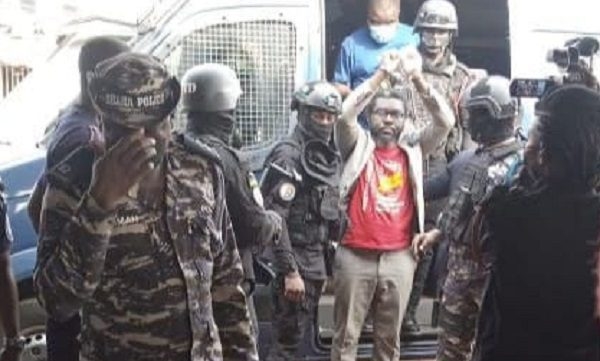 The accused, according to DSP Asare, has been detained for 52 hours beyond the “within 48 hours” allowed by the law.

The leading member of the Fixthecountry movement was picked up by the police at the Kotoka International Airport on Friday, February 11 and was charged for treason felony on Monday morning.

In court on Monday, February 14, 2022, DSP Asare while responding to a question from Her Honour Eleanor Kakra Barnes Botwe, the sitting judge on why the accused was detained for more than 48 hours, he said they made the effort but it proved futile.

According to DSP Asare, they placed an official request to the office of the Chief Justice to constitute a court on Saturday but there was no response.

He added that, they tried all other means to have the accused arraigned over the weekend but “we did not get any response from the Chief Justice.”

DSP Asare also expressed suprise with the defense lawyers allegations that, they were not allowed to see their client.

According to him, he together with his senior Lawyer Akoto Ampaw and Dr Justice Srem Sai were at the Ashaiman District Commander’s office throughout on Sunday trying to get a court for the accused to be arraigned.

He described the allegations as “baseless and untrue.”

The court presided over by Her Honour Eleanor Kakra Barnes Botwe while adjourning the case to February 28, urged the police to treat the accused person well.

The court also urged the media and the general public to be mindful of their commentaries and trust in the justiciary to do a good job.