Home / POLITICS / Chief of Staff, others had to kneel to beg ‘wicked’ Adwoa Safo – Annoh-Dompreh 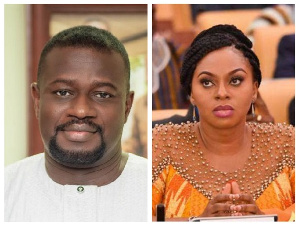 Chief of Staff, others had to kneel to beg ‘wicked’ Adwoa Safo – Annoh-Dompreh

Frank Annoh-Dompreh, Majority Chief Whip, has once again lashed out at ‘absentee’ Dome-Kwabenya MP, Sarah Adwoa Safo, over her continuous absence from Parliament.

According to the Nsawam-Adoagyiri lawmaker, he cannot fathom why the ‘on leave’ Gender Minister will punish the government in such a manner.

He said, the party has done a lot for the ‘absentee’ MP, for which she should be grateful, rather than holding the party to ransom.

Annoh-Dompreh who was unhappy about the Minister’s behaviour claimed that at a point in time, some notable individuals within the NPP had to kneel to beg Adwoa Safo to forgive the party if the party or anybody had done something to offend her but she did not heed to it.

He told Okay FM in an interview on Tuesday, March 22 that, the absentee MP “should think very well, that you don’t bite the hand that feeds you. Our father Akufo-Addo was never wicked to you.

“I entered Parliament with Adwoa Safo, she was given a whole Ministry of Procurement and she was also made the Deputy Leader in Parliament, so, if she can remember she will know that our father Akufo-Addo has done a lot for her.

“Look at the population of NPP members at Dome-Kwabenya, so, our sister is telling us that NPP cannot find any member in Dome-Kwabenya to stand on the party’s ticket? What wrong have we done for her to treat us this way?” he quizzed.

Annoh-Dompreh continued: “I have vowed that if she wants my position as the Chief Whip, she can say it and I will give it to her and stay away.

“If she can really think, she should think and know that whatever she is doing will affect her in the future…if I were to be her, I would be crying for the whole day…she is ungrateful; Adwoa Safo is ungrateful…”

Some leading government officials and some of her colleague MPs have accused Adwoa Safo of blackmailing the government with a list of demands, including the Deputy Majority Leader post.

However, when asked about it, Deputy Majority Leader, Alexander Afenyo-Markin said he is not aware of such demands.

Tags chief HAD kneel OF OTHERS STAFF to