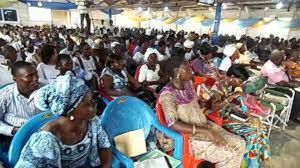 Some church members of the Top Outreach Church International, a breakaway faction of the Global Evangelical Church in Tema Newtown, were left stranded after armed police personnel who were acting on a court order, evicted them while worshipping in Church on Tuesday afternoon.

The action by police personnel from the Tema Regional Police Command on Tuesday afternoon, follows a court ruling on the 8th of July, in a case involving the Head Pastor of the Top Outreach Church International and the Global Evangelical Church formerly EP Church.

The two parties were in court over the ownership of the land property on which Top Outreach Church International is sited.

Both the High Court and the Appeals Court had ruled in favor of The Global Evangelical Church, which had argued that Top Outreach Church had no right to claim ownership of the land it operates on since it acquired those properties in the name of the EP Church.

Police personnel in the company of a court bailiff, acting on a writ of possession, evicted some church members who were worshiping.

Founder of the Top Outreach Church international, Rev Gershon Justice Banini, who spoke to Atinka News said, even though they’ve been evicted, church activities will not be affected. He expressed hope that a court case before the Tema Land Court will rule in their favor.

Madam Rose Banini, the wife of the founder, expressed disappointment in the manner they were evicted without any prior notice.