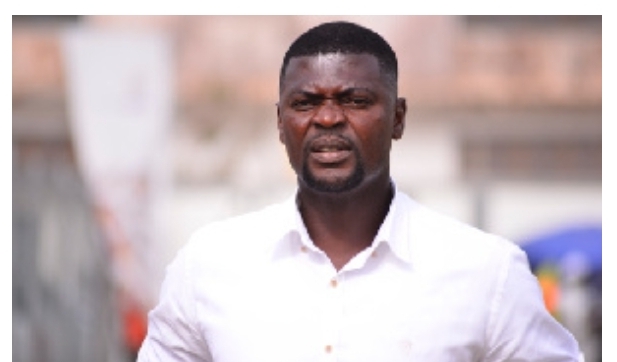 Head coach of Accra Hearts of Oak, Samuel Boadu has been rushed to the hospital whiles managing his side during a Ghana Premier League match.

The coach was rushed to the hospital twenty minutes into the game against Elmina Sharks in matchday 8 of the GPL.

Samuel Boadu was rushed to the Elmina Hospital in the Central Region after he reportedly collapsed.

Startimes commentator, Nana Darkwa Gyasi made the disclosure in the few minutes into the second half of the game.

The game between Elmina Sharks versus Hearts of Oak was barren as at the time when the coach was rushed to the hospital.

Hearts of Oak are yet to release a statement at the time of filing this report.

Last year, Samuel Boadu who by then the coach of Medeama SC was rushed to the hospital after collapsing during his side’s Ghana Premier League game against AshantiGold on Saturday, 25 January 2020.

The gaffer fell on the touchlines after complaining of headache in the second half at Akoon Community Park in Tarkwa during their matchday 6 encounter.

Coach Boadu was quickly rushed to the hospital in a car as no ambulance showed up at the league center.

Eyewitnesses at the stadium confirmed that the game was halted for a while when the unfortunate incident happened so as to save the life of the coach.

“It’s scary and this incident has affected everything,” an eyewitness told reporters.

According to reports, prior to the game, the coach had complained of being under the weather but managed to shake it.

Medeama beat Ashantigold by a goal to nil, thanks to a strike by Prince Opoku Agyemang who has scored 4 goals in 3 games for his club.

Meanwhile, the club has calmed football fans after it took to Twitter to update the public on the sudden incident.

Medeama SC said that Coach Samuel Boadu was in a stable condition receiving medical treatments from the Pentecost Hospital in Tarkwa.

Source: www.ghanaweb.com
Related Topics:BoaduCOACHHOSPITALRUSH
Up Next