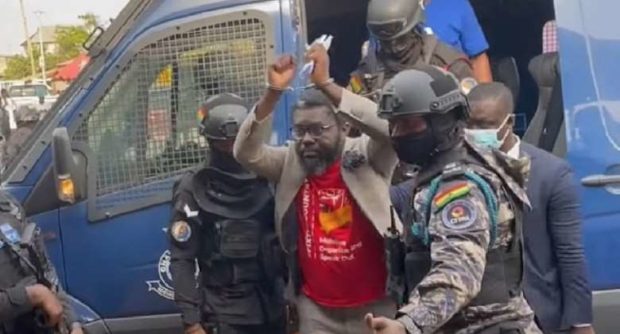 #FixTheCountry convener Oliver Barker-Vormawor, is “the cockroach”, who, according to former Special Prosecutor Martin Alamisi Amidu, “made the mistake of making himself available in the den of ‘the fowls’ administering the system of criminal justice administration” and “received the justice cockroaches deserve before the executive branch of government run by ‘fowls’”.

Mr Barker-Vormawor has been held in detention for more than a month after he threatened a coup on social media in disgust to a widely-circulated customised cake a la e-levy for Majority Leader Osei Kyei-Mensah-Bonsu’s 65th birthday party.

He has been charged with treason felony and held in prison custody since February 11, 2022.

Attorney General Godfred Dame recently filed an affidavit in which he urged the court to keep the Cambridge PhD student in detention because, according to the Minister of Justice, the youth activist has refused to cooperate with the investigative agencies.

Mr Barker-Vormawor has rebutted the AG’s claim and insists he has been cooperative with the security services.

Condemning Mr Barker-Vormawor’s detention in an article, Mr Amidu, who has been an Attorney General before, said: “The government had knowingly and intentionally turned the administration of justice into an inquisitorial and prosecutorial system to intimidate and suppress the lawful political activity, personal liberty and right to equality before the law and non-discrimination of a citizen, Mr Barker-Vormawor, under articles 3, 14, 17, and 291 of the 1992 Constitution”.

“There is no constitutional rational justification for the conduct of the government in the manner it executed the persecution of the suspect as the executive branch has consistently sought to justify to the public”, Mr Amidu said.

He said: “The answer by the government to the public outcry and objection to the unlawful detention of Mr Barker-Vormawor for more than forty-eight hours was the lame justification that the Republic was unable to reach the Chief Justice to assign a judge or court during the weekend. The excuse is lame and frivolous because if Mr Barker-Vormawor was in lawful custody for the offence of offensive conduct conducive to breaches of the peace with which he was charged upon his arrest and a statement taken from him in custody exercising his right to a lawyer of his choice, then the police did not need the Chief Justice or a court to exercise the discretion to grant him police enquiry bail to appear before them or a named court on a named date and time. On the other hand, if the government and the police had received further information and facts with which they had reasonable changed grounds for the continued arrest, restriction or detention of Mr Barker-Vormawor, without informing him of the changed reasons and his right to a lawyer of his choice, the contention that he was not brought before a court within forty-eight hours of his original arrest or detention because of lack of a court during the weekend is vacuous”.

“I have painstakingly read Osagyefo Oliver Barker-Vormawor’s two posts on his Facebook [page] on 9 February 2022 while he was in the United Kingdom within the context of other posts and reactions to the ostentatious, opulent, and profane “Kyei-Mensah-Bonsu’s E-Levy cake for his 65th birthday” celebration. It is my considered view that the two contradictory and ambiguous Facebook comments taken separately or together do not measure up to the basic ingredients of the provisional charge of the indictable offence of treason felony for which he was ‘cynically’ and surprisingly brought before an inferior court without powers of bail on 14 February 2022, and for which he is still in police custody on remand. The perception that the unconstitutional and unlawful arrest and detention of Barker-Vormawor was politically motivated and intended to suppress his lawful political activity has further polarised this country along ideological and partisan lines which is inimical to the unity and stability the Constitution enjoins each citizen to strive to preserve in our democracy”, Mr Amidu argued.

The Government’s 2022 Budget Statement and Economic Policy, particularly its determination to impose its draconian Electronic Transfer Levy (E-Levy) on an already financially exhausted and challenged poor citizenry contrary to its own electoral promises and undertakings has seriously polarized this nation and created needless acrimony amongst the body politic in a manner I have never witnessed since my first involvement in public service and observation of the governance processes of Ghana since February 1982.

The adversarial conflict over the Government’s E-Levy policy eventually deepened with the uncomplimentary public reaction to what some citizens perceived to be an opulent, arrogant, and insulting 65th birthday celebration by the Majority Leader and Minister for Parliamentary Affairs, Osei Kyei-Mensah-Bonsu, (which fell on Thursday 3 February 2022) amid their sufferings and the government’s intention to further tax their scarce incomes.

The “Mr. Kyei Mensah Bonsu’s E-Levy cake for his 65th birthday” celebration provides the immediate context for understanding the public comments and reactions that led to the arrest and detention of a known political adversary of the Government’s policies, Mr. Oliver Mawuse Barker-Vormawor, the convenor of #FixTheCountry, who was later charged unconstitutionally for the offence of treason felony.

Mr. “Kyei Mensah-Bonsu’s E-Levy cake for his 65th birthday” celebration has also led to other citizens being gagged and intimidated from exercising their constitutional rights and freedoms to free speech and thought on pain of being arrested and detained without bail at the behest of hawks and operatives of the Government under the smokescreen of coup mongering or first-degree felony offences against the safety of the state.

The police also later arrested and detained Mr. Kwame Baffoe, the Bono Regional Chairman of the New Patriotic Party (NPP), on 15 February 2022 and subsequently charged him with lesser offences and bailed before a court the next day for accusing former President John Mahama of high treason and/ or treason in a radio interview on 14 February 2022.

Subsequently, operatives of the government made threats to arrest and detain the Dean of the University of Ghana School of Law, Prof. Raymond Atuguba, for coup mongering and treason arising out of a public lecture he delivered at the Erata Hotel in Accra on 28 February 2022. These developments make it imperative for every patriotic Ghanaian and lover of constitutionalism and representative democracy committed to the sustenance, preservation and defence of the 1992 Constitution to speak out boldly against the use or the threatened use of the investigatory and prosecutorial discretionary powers of the Republic entrusted to the executive branch of government in abusing the rights and freedoms of citizens to speech and thought by means of the deployment of the system of criminal justice administration for purely partisan political ends. Any appearance of the use of the system of the criminal justice administration to intimidate, suppress or seek to suppress the lawful political activity of political adversaries in the marketplace of democratic political discourse needs to be unreservedly condemned in defence of the 1992 Constitution.

The 1992 Constitution was intended to ensure a free marketplace of ideas in a representative constitutional democratic society where the rights and freedoms of political adversaries are not suppressed or sought to be suppressed by government over-reach. This was because the nation’s political history teaches that the contrary led to the several previous instabilities that the Ghanaian constitutional democratic processes