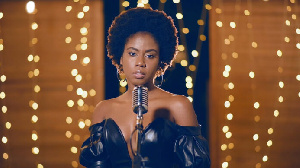 According to MzVee, the representation of female artists on the Ghanaian music scene is not encouraging and as such, there should be a conscious effort by stakeholders to set an agenda to push female songs.

In a live interview with Official Dhamie on GHOne TV’s Instagram page, she said, “I feel like we can start small. Make time to play female songs on the radio, you can start that small. Intentionally, make a conscious effort to play it, it will stick.”

“That’s why all the trendy songs, all the hit songs in this world have made it. People played it over and over again and it stuck and it became something normal. But on the radio stations over here and on the TV, it’s mostly the male musicians they promote. So, I think we can start small and intentionally put more female music out there. ”

MzVee added, “There should be an intention to promote female artists in Ghana”

She however also credited her successes to hard work and good management.