Home / GENERAL NEWS / Coronavirus a year on: Prominent people who have died from the pandemic in Ghana 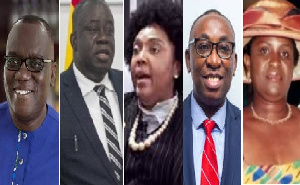 Coronavirus a year on: Prominent people who have died from the pandemic in Ghana

On March 12, 2020, Ghana recorded its first cases of coronavirus when two passengers who arrived via the airport tested positive for the virus.

Since then till today, over 87,700 cases have been recorded out of which over 81,200 patients have recovered but sadly 685 persons have succumbed to the virus.

A number of prominent persons have contracted the virus and openly declared their status with the view to combat stigmatization. Others however succumbed to the virus.

A year on, GhanaWeb looks at some of the prominent casualties.

He died on Wednesday 1st July 2020 at the Korle Bu Teaching Hospital after a short illness. It was reported that the then CEO of Forestry Commission tested positive for coronavirus and passed on after battling the illness for over a week.

Prof Plange-Rhule and other loses to medical fraternity:

The Ghana Medical Association, GMA, confirmed a raft of loses to coronavirus. The death of Professor Jacob Plange-Rhule was the first high profile death. His death occurred in the early hours of April 10.

The consultant physician succumbed at the University of Ghana Medical Centre, where he had been on a brief admission. It was later confirmed that it was due to the virus.

Other losses in the medical fraternity included Dr. Harry Boateng, a Specialist Paediatrician and Medical Superintendent at the Kwadaso SDA Hospital. A retired Orthopaedic Surgeon, Dr. Emmanuel Twagirayesu as well as Dr. Richard Kisser, a Consultant Surgeon with the Trust Hospital in Accra.

President Nana Addo Dankwa Akufo-Addo paid tribute to his former appointee during his 11th address laying to rest rumours of whether the MCE had indeed succumbed to the virus.

“Permit me to pay brief tribute to the memory of an old and valiant colleague … the Chief Executive of the Sekondi-Takoradi Metropolitan Assembly, Hon. K. K Sam, Egya Sam to me and many, whose efforts in enforcing social distancing protocols at the Sekondi and Takoradi markets were, recently, highly commended by me, and who sadly passed away on Friday, as a result of a COVID-related death.”

The year 2021 started off with a lot of concern around the news that the second wave of infection had been triggered by 2020 electoral campaigns and the festive season.

On January 18, the death was reported of National Security Coordinator, Joshua Kyeremeh. Accra-based Asaase Radio reported that Mr Kyeremeh died from kidney complications at a hospital where he was receiving treatment for COVID-19.

Lieutenant General (Retired) Joshua Mahamadu Hamidu, a former Chief of Defence Staff succumbed to the virus. He suffered complications of the disease which eventually led to his demise.

A local news portal reported at the time that the 85-year-old died at the 37 Military Hospital in Accra where he was receiving treatment.

The death of Nanabanyin Pratt, brother of renowned journalist, political commentator and Managing Editor of the Insight newspaper, Kwesi Pratt Jnr, was also recorded in January 2021.

Family sources confirmed that the Public Relations expert and lecturer at the Ghana Institute of Management and Public Administration (GIMPA), died from coronavirus complications on Sunday, January 17, 2021.

Managing Director of Best Point Savings and Loans was another casualty claimed by COVID-19. Philip Odei Asare’s demise was reported on Wednesday, January 20, 2021.

Prior to her passing, Madam Georgette Djaba was a practicing private legal practitioner in the UK who was also active in the politics of the governing New Patriotic Party, NPP.

She was receiving treatment and appeared to be doing well until a relapse, leading to her death, a local online news portal reported. She was survived by her two children with her late husband, who died in November 2018.

His death was disclosed on Joy FM’s news analysis program Newsfile by a colleague, Kwame Sarpong Asiedu, who is a pharmacist and fellow with the Center for Democratic Development, CDD – Ghana.

Asiedu bemoaned the overall impact of Koffuor’s loss when he made the disclosure: “A colleague of myself and Alex (Dodoo) lost his battle with COVID yesterday.

“This is somebody who is a professor below the age of 60. Professorial positions at that age have about two decades to give to society by virtue of experience, by virtue of knowledge transfer by virtue of research,” Asiedu added.