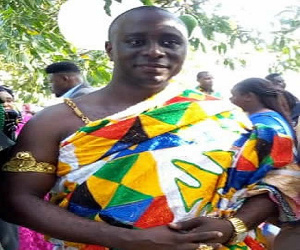 A Sekondi High Court, presided over by Justice Hannah Taylor, has cleared the way for the Apremdo Divisional Stool to celebrate its annual Kundum Festival.

This follows a judgement entered in favour of the Chief, Nana Egya Kwamina XI, known in private life as William Eghan, after a suit had been filed against him and others.

The plaintiffs, Obaahema Kwandoh Kuma and Nana Nware Ezia II, filed the injunction notice against the defendants (Kobina Burafo, William Eghan and Ernestina Fianya), seeking to restrain the three (defendants) from celebrating the Kundum Festival until the performance of the funeral rites of the late Chief, Nana Nyankeh Brem, among others.

The plaintiffs also sought a perpetual injunction restraining the defendants from celebrating the Kundum Festival until a determination of an appeal pending before the Western Regional House of Chiefs, Sekondi.

The suit by the plaintiffs was premised on the grounds that by the custom and tradition of the people of Apremdo, the defendants could not celebrate the Kundum Festival without having in their possession, the Royal Black Stool, and without performing the funeral rites of the late Chief.

The plaintiffs consequently sued the defendants in a suit entitled ‘Obaahema Kwandoh Kuma, Nana Nware Ezia II Vrs Kobina Burafo, William Eghan, Ernestina Fianya’ before the Judicial Committee of the Traditional Council sitting at Busua, challenging the purported nomination and enstoolment of the second and third defendants as the new Chief and Queenmother of Apremdo.

The plaintiffs averred in their suit at the Judicial Committee that the defendants were not members of the Royal Ebiradzi Family of Apremdo, and did not have in their possession, the Black Stool, which was in the possession of the plaintiffs.

The Judicial Committee, after hearing arguments for and against, dismissed the plaintiff’s suit.

The plaintiffs consequently appealed against the decision at the Western Region House of Chiefs (WRHC), Sekondi and issued a writ of summons, together with a statement of claim, against the defendants before a Sekondi High Court.

They also prayed the court, presided over by Justice Hannah Taylor, for an order for the cancellation of the names of the second and third defendants from the National Register of Chiefs as they were entered fraudulently.

The plaintiffs claimed that the defendants, notwithstanding being non-royals, the late Chief funeral rites had not been performed and also not possessing the Black Stool, were preparing to celebrate the annual Kundum Festival.

They contended that by the customs, traditions and practices of the people of Apremdo, it was an anathema and taboo for a non-royal styling himself as a Chief and who did not have the Black Stool in his possession to celebrate the Kundum Festival.

The first and second defendants denied the claims of the plaintiffs as being a Queenmother and Regent of Apremdo.

The duo contended that per the decision of the Judicial Committee, the plaintiffs were not the Queenmother and Regent of Apremdo, and, therefore, had no capacity to mount the action.

On the other hand, they averred that they (2nd and 3rd defendants) were lawfully nominated, elected, confined and installed as the Chief and Queenmother of Apremdo, in accordance with the customs and traditions.

That apart, the defendants have since been gazetted as Chief and Queenmother with the stool name Nana Egya Kwamina XI and Nana Mozu respectively.

They also denied the claim of not being royals, and asserted that they were royals of the Ebiradzi Family of Apremdo, and that their royalty was confirmed by the decision in the Obaahema Kwandoh Kuma VS Kobina Burafo case at the Traditional Council.

The defendants, however, conceded the pendency of the suit seeking to cancel the name of the second defendant from the National Register of Chiefs, and averred that the material issue in controversy was a cause or matter affecting chieftaincy disguised as a dispute involving the celebration of the Kundum Festival at Apremdo.

As a result, the court had no jurisdiction to resolve the material issues in controversy, as it was a matter affecting chieftaincy.

Having both parties filed their claims and counter claims, the court set out the issues for trial as follows:

In the judgement of the court, Justice Hannah Taylor found out that considering the reliefs that were sought before the Ahanta Traditional Council, a competent judicial body, it was erroneous for the plaintiffs to have raised same issue before her court, regarding the royalty of the defendants.

The court said considering the evidence led by second plaintiff and the plaintiffs pleading, they sought the court to pronounce the second defendant as styling himself as a Chief who does not have the Royal Black Stool to celebrate the Kundum Festival.

“This prayer wittingly takes the court to the doorstep of a cause or matter affecting chieftaincy. A cause whose door remains shut to the Court,” Justice Hannah Taylor wrote in her 18-page judgement.

The Judge then concluded that having considered the claims of the plaintiffs and the evidence largely, the case is a disguised cause or matter affecting chieftaincy.

“For all the foregoing reasons, the reliefs sought by the plaintiffs are hereby dismissed. The third defendant’s counter-claim is also dismissed.”

No cost was awarded.